On July 24, researchers at Intezer published a blog about a new variant of the WatchBog malware. WatchBog is a “cryptocurrency mining botnet” that deploys a Monero (XMR) miner on infected systems. WatchBog was previously identified by AlibabaCloud in May 2019, but there are some indications that it has been around since at least November 2018 based on a blog post from Sudhakar Bellamkonda.

Most notable in the new variant of WatchBog is a scanning module for BlueKeep (CVE-2019-0708), a critical remote code execution vulnerability in Microsoft’s Remote Desktop Service that was patched in May 2019, which included fixes for out-of-support versions of Windows. The scanner module appears to be a port of a proof-of-concept scanner published to GitHub nearly two months ago. However, the module variant described in the Intezer blog doesn’t contain any exploit code.

According to the researchers, WatchBog will scan a predefined list of IP addresses fetched from a command-and-control (C2) server to identify vulnerable Windows systems. The researchers surmise that the inclusion of such a module is to prepare for future attacks once exploit code does become public, or to sell the data on vulnerable systems to a third party.

In its latest iteration, WatchBog has incorporated new exploits in what is referred to as its “pwn” modules. These exploits are for two recently disclosed vulnerabilities and they include:

The following is the list of exploits, scanners and bruteforcing modules incorporated into WatchBog:

There are proofs-of-concept (PoCs) available for all of the vulnerabilities used by WatchBog.

For Windows users, applying the patch to address BlueKeep is paramount. The inclusion of the BlueKeep scanner is worrisome enough, but the lingering possibility that exploit code may soon become public underscores the sheer importance of patching against it. This is highlighted by a recent report that there are over 800,000 systems vulnerable to BlueKeep that are still internet accessible.

All of the vulnerabilities leveraged by WatchBog have been patched over the last eight months. Users running Jenkins, Nexus Repository Manager 3, Apache Solr, Exim, Atlassian Jira Server and Data Center should apply the available patches as soon as possible.

If you have CouchDB or Redis servers in your environment, it is important to ensure that they’re not exposed publicly, but if they are, use strong and unique passwords and review the CouchDB and Redis security guides.

A list of Tenable plugins to identify these vulnerabilities can be found here:

Additionally, customers can utilize custom YARA rules as well as the file scanning feature on Tenable.io and Nessus to scan for hashes associated with WatchBog on Linux hosts.

The following Linux malicious file detection and YARA plugins are available to customers:

Intezer provided three SHA-256 sample hashes that can be used in a list of known bad hashes:

In the user interface, customers can provide a list of known bad hashes:

There are some advanced options that customers can use to scan $PATH locations, /home as well as custom directories.

The following is an example scan result for known bad hashes for WatchBog: 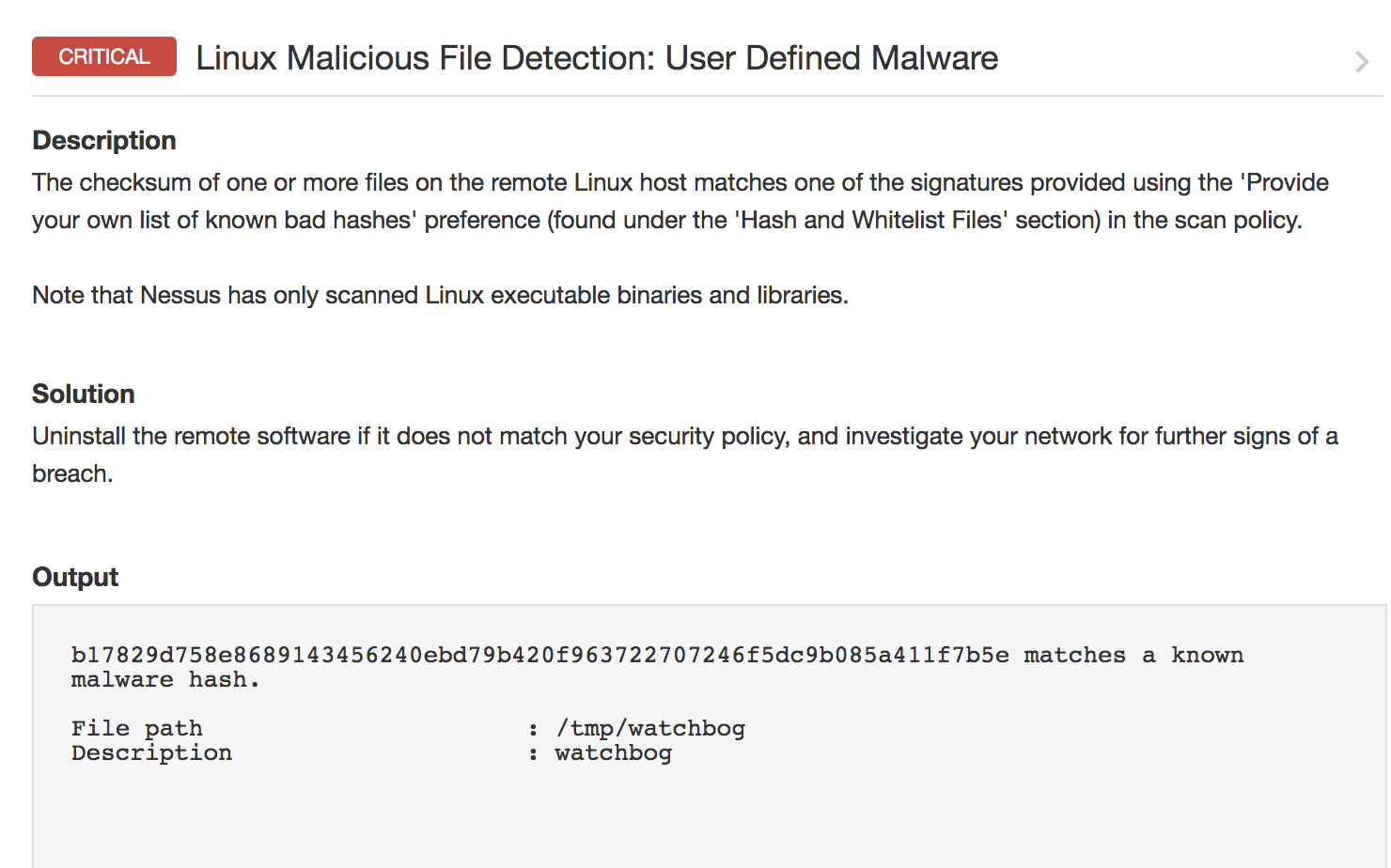 Additionally, Intezer provided a custom YARA rule that can be used to identify unknown or newly discovered Watchbog samples. The following is an example scan output for the YARA file scanning plugin.